My second Top 5 Wednesday post and I’m already in love with them. Such simple and fun posts! This week, we were supposed to choose 5 favourite villains. It was recommended not to mention any Harry Potter characters, since everyone would use those, and I agree with this recommendation. It’s better to find out about some new characters and books. My choices for this Top 5 are a bit unconventional, since I realized most of the books I like don’t really have a villain. XD

Rachel is such an intriguing character, and throughout the entire book you keep wondering what her actual plans and feelings are. And the most amazing part is that after the ending you’re not even sure if Rachel was a villain or not. I don’t want to reveal too much (though maybe I already have) but the ending is amazing! 🙂

It’s interesting to see how Brandon Sanderson makes a character interesting without actually letting the character appear too much in the book. Even the identity of Lord Ruler is uncertain for quite a long time. And yet, he affects quite a few characters in the book, who start to question their own motives and decisions in comparison to what he did. They even start to ask themselves if Lord Ruler did the right thing after all.

I like it when the main character is a villain! There are some books in which you don’t realize this until the end of the book, and it comes as a surprise, and your mind is blown, and it’s amazing! XD (I won’t name the books because that would spoil them completely.) Anyway, American Psycho is not that kind of a book. Patrick is obviously insane. And though some parts can be hard to read, I think that the novel is magnificently written. Patrick’s attention to detail and his perception of the world were very interesting, despite the fact that his mind is not a nice place to dwell in.

I like Carmilla more than Dracula. Sorry, not sorry. This classic vampire tale always reminds me why I love vampires so much. Carmilla is so mysterious and intriguing, you actually want to believe she’s not evil.

Who is the villain – the monster or its maker? As someone said: 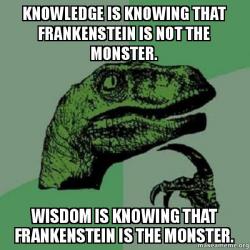 P.S. I don’t actually do these posts in any particular order, it would probably make me crazy… XD So, these villains are all equally great to me, each in his/her own way.

This is going to be silly and fun! Thank you Misty for tagging me to do the Marry Kiss Cliff tag! ❤ You can all check out her post here. You should check out her blog in any case!

The rules are simple:

I tried to mix some nice and some horrible characters, so we’ll see how this ends. There will be five rounds in my case, that’s how many little papers I cut from the piece of paper I had. XD Here it goes!

Round 1: Lestat (The Vampire Chronicles), Victor (Vicious) and Spider-man

As much as I love Lestat, I’m not sure I’d like to marry him. But I want him to make me a vampire. 😛 And that means I don’t want to cliff him and makke him angry. (Cliffing him wouldn’t kill him, of course.) So I guess I’ll kiss him, and we can be friends later. I would cliff Victor because I would definitely marry Peter Parker. Always marry Peter Parker! Hopefully, a villain won’t kill me.

Well, first of all, I would kiss Frey. Again, not the guy I would like to marry, but I really like him so no cliffing. And now we have a problem… Elend always seemed very attractive to me, but I don’t want to kill Ron. Nooo! Then again, Elend kind of lost his attractiveness later on, when he became a king and stopped being buried in books all the time. So I’ll chose Ron, and cliff Elend. Sorry!

Out of these three, I would definitely marry Kell. As much as I don’t like Rochester, I hate Eli’s fanaticism more, so I’d kiss Rochester and cliff Eli.

Round 4: Victor Frankenstein (Frankenstein), Koscei (the one from Deathless, not from folklore), Draco Malfoy (Harry Potter series)

Oh, come on! I can’t marry anyone! I’m in trouble whoever I marry! Frankenstein is egocentric and heartless, Koscei is basically the villain of Russian folklore, and Draco wanted to get Buckbeak killed! (Yes, that’s the thing I can’t forgive him.) And I can’t really cliff Koscei, he can’t die. Let’s just pretend this never happened, shall we? 😉

Well, let’s pretend I can actually cliff Voldemort…  Why did I even write his name down? I’m crazy… Anyway, I’d cliff him after all the horcruxes are destroyed because I don’t want to just make him angry. If he falls, he has to stay down. XD I’d kiss Heatcliff because I definitely wouldn’t want to marry him, but I feel sorry for him and I don’t want to cliff him. So, that means I would marry Tyrion. XD

Hope this was fun for you! 😉

Now, I’ll tag a few people. If you want to do the tag, I’d be happy to read your posts, but of course, you don’t need to do it: Nicole, Beatriz, Jen, Zezee, Anna.

I’ve found out about the Top 5 Wednesday group on Goodreads quite some time ago, and I always wanted to participate but never did… Now it’s the time to start doing it! Maybe not every Wednesday, but as often as I can. They have some very interesting ideas, just like this one.

So, here are the five books I’d like to re-read: 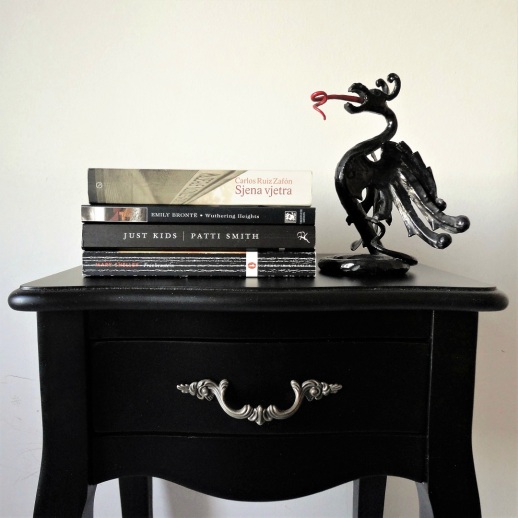 I loved this book! I’ve already read it two times, but I feel the need to re-read it. And soon!

2. The Hunchback of Notre-Dame by Victor Hugo

I’ve read this book in college and it immediately became my favourite. And favourites have to be re-read. 😉 I don’t own a copy, though, but I’ll get it soon.

3. The Cemetery of Forgotten Books series by Carlos Ruiz Zafón

These books are so lovely, dark and cosy at the same time. I would definitely like to re-read them.

An amazing book like this one has to be read many times!

My all-time favourite, I’ll probaby read it many, many times more. 🙂 As you can see in the picture, the book is already very battered.

I hope I’ll have the time to actually read them all again in the near future. 😉

I came across Kat Myrman’s Twittering Tales challenge and it seemed so fun! So, I decided to participate. The idea is to write a Twitter-lenght story (140 characters or less). Here is my story for this week’s prompt image: 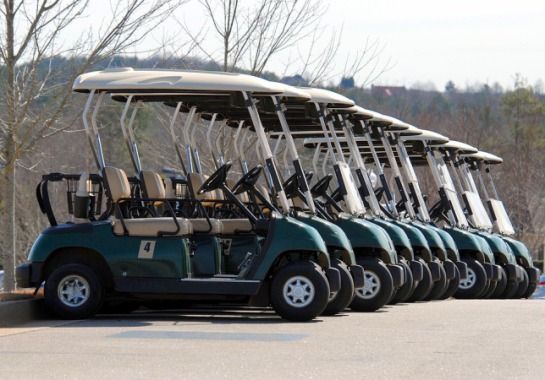 Golf clubs were abandoned. When it came, money couldn’t save the rich. Wealth gave them no power anymore. They tasted the same as the poor.

I like writing some short forms of stories that I’ve encountered here, on other people’s blogs. I think they are very fun to write, and great for practicing your writing. Yesterday, I wrote one six word story, and then the other followed… And in the end, I thought they went well together. So, this is a two sentence story made of two six word stories. XD

The topic is: Fake it ’till you make it.

Face smiled, but eyes were frowning.

Mask on, game of life begins.

Hi, bloggers! Once again, I haven’t posted in a while… I’ve beeen quite busy. But, now, the lovely Nicole from Sorry, I’m Booked tagged me to do this fun tag, and I had to do it. Thanks, Nicole, so much 🙂 Let’s start!

My name is Irena and I’m a bookaholic. Here are my answers:

Everything! XD I like the excitement you get from getting a new book, especially if it’s a book you’ve been wanting to read for a while. And the smell! New books smell amazing. 😉

How Often Do You Buy New Books?

It depends. Now, when I have a job, I buy more than before, becuse I can. XD I’m actually not an impulse buyer, so I don’t often get carried away.

Bookstore Or Online Shopping — Which Do You Prefer?

I love browsing thrugh the books in a bookstore, but bookstores here suck. 😥 So, unfortunately, online shopping is the only way for me to get the books I want. Especially if I want to read them in English, not in translation. I don’t like reading translated books if I can read them in their original language.

Do You Have A Favorite Bookshop?

Well, as you can see in the previous answer, not really… There is only one bookstore that I like, but it’s not that great… When it comes to online shopping, I order books from Book Depository.

Do You Pre-Order Books?

Very rarely. Most of the books were already published when I read them. XD I guess people mostly pre-order books from series, because they can’t wait to see what happens next, but I don’t read many series, so this doesn’t really apply to me.

Do You Have A Monthly Book-Buying Limit?

Book-Buying Bans, Are They Something For You?

As I said, I don’t really have a problem with over-buying. (Is that even a word?) I don’t like to pile up too many books, and having a huge TBR pile. So there’s no need for me to be on a book-buying ban.

I have about 200 books on my Goodreads TBR, but I’m sure there’s even more on my mind. XD

Which Three Books From Your Wish List Do You Wish You Owned Right Now?

Just three? This is hard… XD
Let’s say: Fudoki by Kij Johnson, Nothing Like the Sun by Anthony Burgess, and The Winter King by Bernard Cornwell (though it’s the first in a series, so I’d have to get the others, too. ;)).

In the end, I have to tag a few people. So, if you want to do it, I’d be happy to hear your answers: Jeanyjanez, Misty, That Weird Brown Girl , Genie Reads 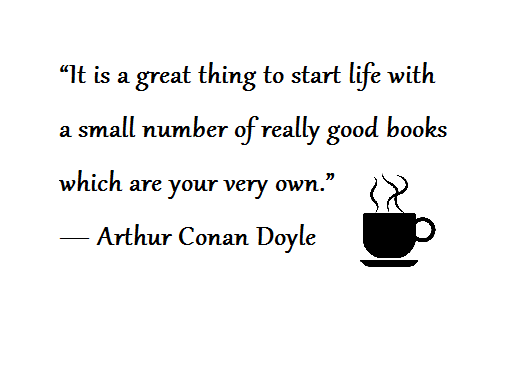