I’ve finished The Once and Future King a few days ago but I didn’t know how to start with this review. I also studied for my Swedish exam – I study Swedish in a school for foreign languages – so I didn’t have the time to gather my thoughts. Anyway, I digress too much. I said in my previous review of the novel that I will share more of my thoughts after I finish it, and there really is a lot to say, so I’m keeping my word. There might be slight spoilers in this review, even though the versions of the story are quite well-known.

Let me say first that the book definitely didn’t disappoint me and it is one of the best books I’ve read this year. I liked how the characters were portrayed, with all their flaws and virtues. Nobody, not even Arthur or his most noble knights, was without a flaw. The narrator’s commentary, which I also mentioned in the previous post, keeps reminding us about it. The narrator also every now and then reminds the readers that what they’re reading is a work of fiction and refers to Thomas Malory’s version, saying how he’s left out some parts which can be found in his book. Thomas Malory also appears as a character in the end of the novel – he is a young boy who serves Arthur. Before the final battle, Arthur says to the boy that he shouldn’t fight because somebody has to stay alive and tell the story of his life and his ideas, and I thought this was wonderful.

“Thomas, my idea of those knights was a sort of a candle, like these ones here. I have carried it for many years with a hand to shield it from the wind. It has flickered often. I am giving you the candle now – you won’t let it out?”

Arthur really gives everything to his ideas, and is willing to sacrifice even his wife and his friend for the greater good. And what is the greater good? Sometimes, not ever Arthur is sure. He is constantly trying to find out a way to make the world a better place, but he doesn’t know how. He learns that chivalry is not as honourable as he thought, he realizes that fighting for a cause doesn’t prevent people from doing evil, and even the search for the Holy Grail doesn’t bring him any answers. There is no recipe for good – it is something you always have to strive for, and fight for. And sometimes, what you think is good may not be good at all. Doing good is always a work in progress. Perfection cannot be achieved, which is in a unique way shown in the characters of knights who come to find the Grail – mainly Galahad – and I love how ambiguous the notion of good is in the novel because good is ambiguous in reality, too.

If people reach perfection they vanish, you know.

Another thing I would like to mention is that at several points in the novel, the narrator speaks about history and explains the life in Camelot, comparing it to the life in the later centuries. There are also some references to known fictional works, for example The Canterbury Tales. Even though the readers are detached from the time period of the novel by constant reminders that this story is something that happened a long time ago, they are also given vivid images of the Middle Ages. The narrator is critical of the life in Middle Ages, but also recognizes everything wonderful and interesting about them, for example the architecture and art.

The Dark and Middle Ages! The Nineteenth Century had an imprudent way with labels. For there, under the window in Arthur’s Gramarye, the sun’s rays flamed though from a hundred jewels of stained glass in monasteries and convents, or danced from the pinnacles of cathedrals and castles, which their builders had actually loved. Architecture, in those dark ages of theirs, was such a light-giving passion of the heart that the men gave love-names to their fortresses. (…) Think of the glass itself, with it’s grand five colours stained right though. It was rougher than ours, thicker, fitted in smaller pieces. They loved it with the same fury as they gave to their castles, and Villars de Honnecourt, struck by a particularly beautiful specimen stopped to draw it on his journeys, with the explanation that “I was on my way to obey a call to the land of Hungary when I drew this window because it pleased me the best of all windows.”

I could quote a lot from this book, but I’ll leave you with just a few more aphorisms and a whole-hearted recommendation to read this novel.

…business of the philosopher was to make ideas available, and not to impose them on people.

The bravest people are the ones who don’t mind looking like cowards.

We cannot build the future by avenging the past.

He felt in his heart cruelty and cowardice, the things which made him brave and kind. 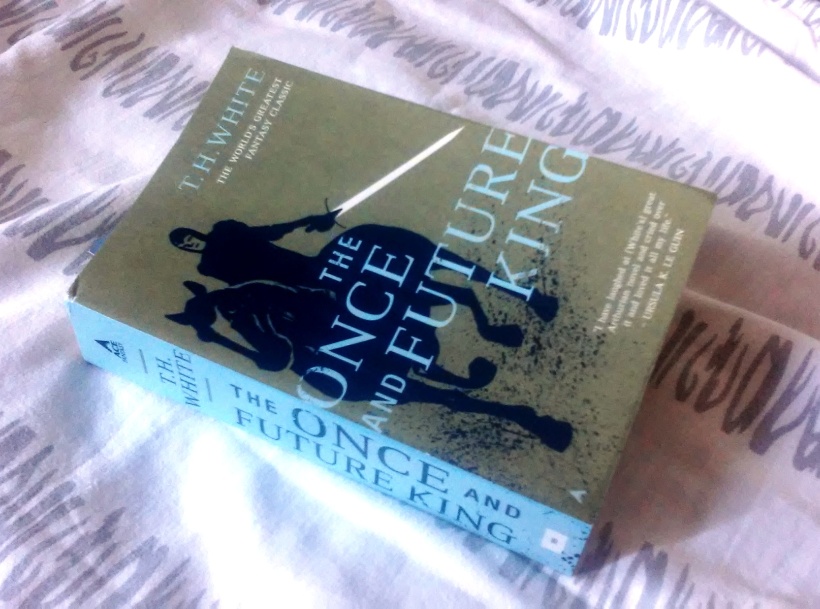 “The Sword in the Stone” is the first book of T.H. White’s novel The Once and Future King, a retelling of Arthurian legends. As someone who is really fond of these kind of legends, I just had to pick it up. Finally.

First, I want to say something about the style. Some aspects of the story are explained and described in terms which did not exist in the Middle Ages – for example, the Badger speaks about his doctoral dissertation, which I found amusing. And really, mostly this is quite humorous, and it worked great. Sometimes, though, I wanted to be dragged into the world of king Arthur and this prevented me a little bit. However, I did find some references quite interesting as they referred to our time in a critical way, which gives another aspect to the novel. I also liked some references to the medieval tradition, for example Robin Hood appears in the novel. I especially liked how maid Marion was portrayed.

Now, let’s talk about the story. “The Sword in the Stone” part follows young Arthur’s childhood and education, the times when he was still called Wart. Wart is raised by Sir Ector and lives in the shadow of his son, Kay. Since Kay is Sir Ector’s real son, he’s supposed to become a knight, and Wart his squire. Wart wishes he could be a knight, but accepts his destiny. However, the boys’ tutor Merlyn pays much more attention to Wart.

Throughout the book, Merlyn gives Wart some life lessons and transforms him into different animals. By learning about the ways in which the animals live, Wart learns about the world in general. And here comes the part that I found most enjoyable. It’s easy for a book about knight and chivalry to portray fights and war as something interesting and almost good. However, T.H. White turns this around. For example, this is how a goose reacted when Wart asked her if geese have wars against other geese.

“What a horrible mind you must have! You have no right to say such things! And of course there are sentries.There are jer-falcons and the peregrines, aren’t there:the foxes and the ermines and the humans with their nets? These are natural enemies. But what creature would be so low as to go about in bands, to murder others of its own blood?” …

“I like fighting,” said the Wart. “It is knightly.”

“Because you’re a baby.”

Arthur is quite naive in the beginning. He looks up to the knights, who act funny and whose tournaments look like jokes – which is also a nice comment on violence. He also looks up to Kay, the boy he grew up with, even though Kay is vain and not kind to him. The author stresses this himself, and makes sure that the reader is aware of Wart’s naivety:

The Wart continued to be stupid, fond of Kay, and interested in birds.

Several years later, Wart has a conversation about fighting with the Badger, in which the Badger also says how humans wage war against each other, and how they are feared by all animals. Wart says that he would like to be a knight, go to war and show his courage. He also says that the ants fight against each other. And in the end, the Badger then puts everything in the right perspective:

“Which did you like best,” he asked, “the ants or the wild geese?”

The chapter ends here, but to the reader it’s obvious that Wart didn’t really like the ants, and that he enjoyed his time with the geese.

Silly Wart will become the great king Arthur, which is shown in the end, when he manages to draw the sward from the stone. To do this, he had to use all the knowledge he gained from Merlyn and the animals. II think this shows that he has the ability to grow and become wise. In the beginning of the second book (I’ve read only three chapters so far) Wart is still not completely changed, but Merlyn still teaches him the same values.

“(…) What is all this chivalry, anyway? It simply means being rich enough to have a castle and a suit of armour, and then, when you have them, you make the Saxon people do what you like. The only risk you run is of getting a few bruises if you happen to come across another knight. (…) All the barons can slice the poor people about as much as they want, and it is a day’s work to hurt each other, an the result is that the country is devastated. Might is Right, that’s the motto.

I really like Merlyn’s words and criticism, and it will be interesting to see how Arthur’s character will develop.

I will post another review once I finish the entire book. I’m really excited to see how it progresses. 🙂