Another Wednesday, another Top 5! 🙂 I found out about Top 5 Wednesday on Goodreads, so click HERE if you want to join the fun!

1. Tooth and Claw by Jo Walton 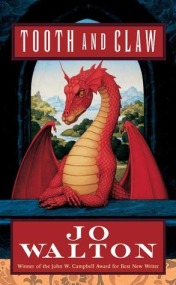 A Victorian drama meets dragons. And not in a way you’d expect. All the characters are dragons! But they act like people, they have the aristocrats and the poor, they ride in carriages but sleep on their pile of treasure. XD This book is so fun, and I recommend it to everyone who can look past a little bit of silliness.

2. The Unusual Possession of Alastair Stubb

This book is crazy, but in a good way. I loved the strange atmosphere, dark family secrets, and deranged characters. It’s creepy, but not too much. And it’s very, very fun.

3. The Last Man by Mary Shelley

People know Mary Shelley as the writer of Frankenstein, and forget that she wrote some other books, too. Though I liked Frankenstein more, The Last Man is also very interesting, mostly because Shelley used the people she knew (Pery Shelley and Lord Byron) to create her characters. She took some of their ideas and put them in a pre-apocalyptic world. As everything falls apart in the novel, we can also perceive some of Mary Shelley’s feelings once she was left alone, the last of the Romantics. I wrote a post about this book quite some time ago, so CLICK HERE if you’re interested.

This epistolary novel from the 18th century has a lot in common with the works of Jane Austen, but since it was written before it deals with a different society with different manners. Now, I’m not a big fan of Austen (sorry!) but I really did enjoy this novel.

I don’t think this trilogy has a name, probably because each book has its own story (the third one could almost be read on its own but it would be better to start from the beginning). If you’re interested in the life of the Celts, you just have to read these! Besides enjoying the stories, I also learned a lot.

Aaaand, an honourable mention: The Vampyre by John William Polidori. The first aristocratic vampire tale, before Dracula and even before Carmilla. If you are a vampire afficionado (as I am) this is a must-read. This is where it all started! Not the best book ever, but still. 😉

Have you read any of these? What did you think?

Horror fiction has always shown what people fear the most, and so is the case with vampires.

When exploring the character of the literary vampire, it is important to start from the beginning and state some facts that go beyond the borders of written literature: the characters’ folkloric roots. The folk stories about vampires have existed for centuries, and it is hard to explain why they appeared in the first place. Similar stories can be traced all over the world, including China, cultures of Australian Aborigines, ancient Mayans, Africa and many more. (Joshi 369-372) The stories appeared in different forms, and probably held different connotations. Even if we focus only on Eastern European tradition, from which the literature of the 19th century drew most of its inspiration, it is impossible to find all the contexts in which the vampires appeared. In old pagan traditions vampires were even worshipped and offered sacrifices. (Collins Jenkins 189) They were closely connected to pagan beliefs and, according to one of several theories, the words vampir, upir, upyr, upior and other similar forms are derived from Turkish word for witch – uber. The bloodlust, one of the most prominent features of the vampires, is thought to bear connection to pagan blood sacrifices. Accordingly, some linguists argue that the root of the word vampire is the Greek word pi meaning “to drink”. (Collins Jenkins 193)

Due to their large number and different backgrounds, the folk stories did not match and they varied to a great extent. In folklore, the characteristics and even names of creatures such as vampires, werewolves, ghosts and other eerie creatures overlapped, and the way people perceived them was not as specific as it is today. One of the creatures that were often intertwined with the vampire was the werewolf, mostly because sometimes in folklore the werewolves were suspected of becoming vampires after death. (Collins Jenkins 199-200) The words that originated from the Slavic word varkolak meaning “wolf pelt” (such as vurkolak in Turkish, volkudlak in Bulgarian, vurvolak in Albanian and vukodlak in Serbian and Croatian) are now mostly translated as ‘werewolf’, due to the obvious connection to wolves, but they originally denoted “a cosmic monster that caused eclipses by eating the sun or moon before setting back on earth and taking on the additional sense of the devouring dead.” (Collins Jenkins 200) (This description also reminds me of Nordic mythology and Loki’s son, wolf Fenrir.) The exception is the Greek vrykolakas which is usually interpreted as a vampire, though it was originally perceived as the undead spirit that glided through the night with a lantern in its hand, and was not always malicious. (Collins Jenkins 201/204)

The vampires gained their name and a bit more distinguished features in the seventeenth century. What connected all of these stories later on became the foundation on which the vampires gained their recognizable form. Those vampires were reanimated corpses with a thirst for blood. (Joshi 366) The reasons for their rising from the grave and some of their features varied, just as is the case with any other superstition. Even today the vampires change and become reinterpreted times and times again. However, vampires first had to become interesting to people so that their story could be developed further. As an important step, literary vampires adopted some aristocratic features so that they could therefore become a part of society, and get close to everything human. Once put in a story, the vampire was finally sketched in a more detailed way. It gained some of the characteristics we nowadays commonly associate with vampires, probably the most important being its appearance. They kept their roles as dreadful villains, and therefore it is inevitable that they came to represent all of the biggest fears of the contemporary society, including moral decline, and even political issues.

In 19th century literature, vampires rose from their tombs in human form, and came to represent human traits, but namely the bad ones. The first “aristocratic vampire” appeared in John William Polidori’s vampire story “The Vampyre” written in 1819. It was followed by the more popular Carmilla, Varney the Vampire series and, of course, Dracula. Those literary vampires developed from the folkloric hideous monsters into more human-like and alluring creatures. What set literary vampires apart from the vampires of folk tales is the fact that they acted like people. Furthermore, their appearance became less repugnant, but this in a way made them even scarier. They could now prey without people even noticing them, and walk freely among them. Once the vampires managed to infiltrate the society, they inevitably acquired their place in it. Moreover, they took the roles of the aristocrats, and that gave them possibilities they would not have as common people. Vampires also started to represent all of high society’s fears – they gained many metaphorical meanings, and the stories in which they appeared became credible and even represented the way 19th century society functioned. First of all, literary vampires embodied the fear of moral decline and represented the primitive part of human nature that is in confrontation with social norms. Accordingly, all of the aforementioned authors dealt with themes of sexuality and emancipation of women which were considered dangerous, but they also show how people can easily get corrupted.

Lord Ruthven form “The Vampyre” represents an immoral, but attractive nobleman who has the power to enchant people, especially the ladies. He awakens their desires and makes them forget all the social rules, and that leads to their downfall. He is also an intriguing character, and demonstrates how easily people become fascinated with everything unfamiliar and obscure. Carmilla also corrupts the young ladies with her charm and good looks. She approaches a young girl named Laura as a friend, and creates a strong bond with her. The moral decline is in both cases connected with sexual desires. Carmilla can also be seen as embodiment the part of human character that is close to nature, closer to an animal than to a human being. She praises the nature, and also acts possessively towards Laura, unable to refrain from her desires.

Count Dracula is different in that aspect. Sexual allusions are mostly connected to Lucy, while Dracula mostly represents another kind of threat – he is a savage foreigner and also stands as a representative of the past, in opposition to contemporary society and technical innovations. Unlike Lord Ruthven and Carmilla, Dracula does not only represent moral “pollution” – the novel implies that the British were afraid of possible “reverse colonisation”, the foreigners overflowing the locals. The fear of foreigners was always present, and sadly, it is still present today, as people still connot escape completely from their prejudice.

Vampires became interesting characters that were not only monstrous villains, but also embodiments of issues that were considered dangerous, and a threat to everything that was considered civilised and human. Therefore, it is not surprising that all of the vampire characters are compared to animals. They also served to reinforce the accepted social behaviour by subtly warning the readers about the consequences of misbehaving. Unquestionably, vampires stepped out of the limitations of Gothic fiction by becoming more realistic and contemporary. Instead of inflicting irrational fear, the literary aristocratic vampires represented the real fears of the contemporary readers. The vampire stories were interesting because they were believable and tackled the issues that readers in the 19th century really thought about. Also, the aristocratic vampires were interesting as representatives of everything forbidden and dangerous, and that is a concept that people have always found attractive. Nowadays, people have still not become bored with vampire characters, which are continuously being adapted to the expectations and thought of the 21st century. The old stories, especially Dracula, are still read today because they depict the 19th century society, but also because the aristocratic vampire represents a creature that is not scary because of its monstrosity, but inflicts fear in an interesting and provoking way.

And what does this mean in the relation to the literary vampires today?  For example, Anne Rice’s novels are the exploration of vampires and what it means to be a bloodthirsty monster. Are they only ruled by their thirst for blood, or are they more similar to us than we thought? People do not accept that something is evil without questioning anymore. Say what you want about “new vampires”, but they show how the society has in some aspects changed for the better. Strict moral rules do not apply, women have fought for their right to be emancipated (and are still fighting), and we know that meeting people from all around the world enriches us.

What we fear the most is ourselves. We have become aware of the problems we have caused, both to our species, but also to the world in general. We see what people are capable of doing. We see that we can be monsters. And that is why fictional vampires (and other monsters) have become more and more human-like. And I think this is a good thing, even though a bit concerning. I may sound a bit too optimistic, but I’ll just say it anyway: it is important to start questioning ourselves and taking responsibility for our actions if we want to make the world a better place.