I’m really happy with my book choices lately. Juliet Marillier’s Daughter of the Forest is amazing so far, and I believe it will be amazing ’till the very end.

This novel is a retelling of the fairy tale “The Seven Swans”, but it’s also so much more than that. It’s a story about six brothers and a sister, Sorcha, who will in the end have to save all of them. I believe this sentence from the Goodreads description portrays it perfectly:

Daughter of the Forest takes the reader to an Ireland on the edge where history and fairy tale meet.

The book has fantastical elements, but the magic feels so realistic that you almost don’t percieve it as something foreign or made up. It is also deeply rooted in Celtic folklore, and it speaks about the history of Ireland and Britain, where different nations lived, fought, and coexisted. At times it felt like reading historical fiction.

One thing I’ve noticed, which may not be that important to everyone, but is very important to me, is the way this book deals with animals and nature. Respect which the characters show towards nature is very true to Celtic beliefs (I’m not an expert on this, but I’ve read about it quite a lot). It is stressed many time just how important nature is, and I think this is something we should hear more often. The villain of the story shows her true nature by doing bad things not only to people, but also to the plants. Animals are treated with respect. One of the brothers saves a dog, loyal Linn who appears all the time in the book (at least for now). Another brother saves a wounded owl, and cries as he lets her fly free. Sorcha doesn’t even eat animals, and I was so happy to read that, since it is not that common to have vegetarian characters.

I had not eaten flesh or fish since I was a small child, for I had always felt a closeness with other creatures that made my senses revolt at the very idea.

Then, there’s also her reason for not wearing shoes:

“I need no shoes, Father,” I said, hardly thinking. “My feet are tough, look,” and I raised one narrow, grubby foot to show him. “No need for some creature to die so I can be shod.”

I was so excited to read this, as I, too, don’t wear leather at all. And then, this book is also against war, and it makes it clear that people shouldn’t be judged by their nationality. So many good messages! This is what one of the brothers, Finbar, says to Sorcha:

“But there are two sides to every fight. It starts from something small, a chance remark, a gesture made lightly. It grows from there. Both sides can be unjust. Both can be cruel.”

Sorcha is kind and loving, but she’s also smart and she always speaks her mind. She knows how to make potions and is a very good healer. It is clear that she is proud of who she is, and that she doesn’t want to change for anyone.

“Why should I be polished and improved like goods for sale? I might not even want to marry! And besides, I have many skills, I can read and write and play the flute and harp. Why should I change to please some man? If he doesn’t like me the way I am, then he can get some other girl for his wife.”

Of course, good messeages don’t necessarily make a good book, but this book IS good. It is interesting, thought not too fast-paced. It gives you time to get to know the characters, without being too descriptive or slow. I really hope it’ll stay this good until it’s finished.

Have you read Daughter of the Forest? Do you want to? Feel free to let me know. 🙂

“Life—the way it really is—is a battle not between good and bad, but between bad and worse”
― Joseph Brodsky

I’ve just reached the end of Before They Are Hanged, the second book in this trilogy. Overall, I really like this series, and I can’t wait to see what the finale brings!

There’s a lot to like about this series. The writing is slow-paced, which I think is a good thing. Instead of writing many fight scenes, the author really focuses on the characters – and they are all amazing and interesting. The narration is third person subjective, and we are given the story through the perspective of several characters, all of them unique. This doesn’t mean the plot is boring, not at all. There is figthing. And spirits, magic, strange creatures, torture. There’s mystery and problems to solve.

The characters are, in my opinion, the greatest asset of this book. They are unpredictable, flawed, and very real. All of them have their own story, their own personality, and very different motivations. Neither of them is perfect, but they aren’t evil either.

Logen Ninefingers is a notorious man, perceived by many as a savage – and with a good reason. And yet, there is certain kindness and innocence about him. Sometimes, he gives very good advice, which proves he’s actually quite clever.

“Doing better next time. That’s what life is.”

– Logen in Before They Are Hanged

Jezal Luthar seems like a perfect knight. But he is vain, sometimes almost stupid. And yet, strangely likeable.

Bayaz is a wizard. The most famous one. Wise, yes, and powerful, but there’s also something dark about him.

Glokta in an Inquisitor. A torturer. He grew cruel and bitter after the painful events that had made him a cripple. But he is also smart and his snarky comments are, in my opinion, the best part of the book.

“Every man has his excuses, and the more vile the man becomes, the more touching the story has to be. What is my story now, I wonder?”

– Glokta in The Blade Itself

Ferro is a wild woman whose only purpose in life is revenge. She trusts no one. She shows kindness to no one. But there’s much more to her than what meets the eye.

There are many more interesting characters in this book, all of them layered and well-developed. All with a story to tell. What more to say? This is an amazing fantasy series, and though I’m not finished reading it yet, I think I can recommend it to all fantasy lovers.

Have you read this book? What did you think of it?

Top 5 Wednesday is hosted by Samatha at Thoughts on Tomes. The guidelines and topics can be found on the Goodreads group.

This week’s topic are fantasy and science fiction books, but the ones you haven’t read yet, but want to read SOON! There are much more than five SFF books I really want to read, but here are the six books that first came to mind so I guess I want to read them most. Yes, I said six. Five is not enough this time. 😉

1. Tropic of Serpents by Marie Brennan

I ordered this book recently and I can’t wait for it to arrive! I loved the first book in the series, A Natural History of Dragons, which you probably know since I’ve talked about it a lot. Lady Trent is a dragon naturalist, and that is basically my dream job. I have to read this, soon! Actually, I have to read all of these books. The last one comes out in a month or so. 🙂 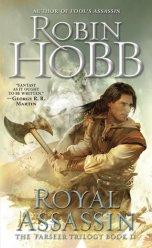 I’ve recently read the first book in the Farseer Trilogy, Assasin’s Apprentice and I can’t wait to continue with the series. I really like the main character, Fitz, the world, and I want to learn more about the Fool!

3. The Long Way to a Small, Angry Planet by Becky Chambers 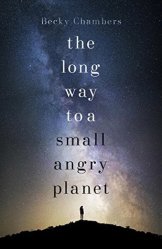 I’ve heard great things about this book. It’s supposed to be a very character driven science fiction/ space opera with aliens – which sounds amazing. My boyfriend actually bought a copy recently, so I’ll borrow it from him. Soon, of course. 😉

4. Company of Liars by Karen Maitland

I don’t know much about this book, but it is set in the Middle Ages and has some magical elements, so it’s a combination of historical fiction and fantasy. I’m a bit obsessed with the Middle Ages, so this is a must-read for me.

5. The Winter King by Bernard Cornwell

This is the first book in Bernard Cornwell’s series about King Arthur, and as a huge fan of Arthurian legends I need to read it! Also, I kind of want these covers… They are so pretty. (Yes, you shouldn’t judge the book by the cover, but just look at them!)

6. Prince of Thorns by Mark Lawrence

This is an epic fantasy book, also a first in the series which is often classified as dark fantasy. It’s supposed to be very, very violent and gritty, and that kind of draws me to it… I’m probably crazy. XD But I think dark and violent books can be great if done well. That’s why I can’t help being intrigued by this one.

Have you read any of these? Did you like them?